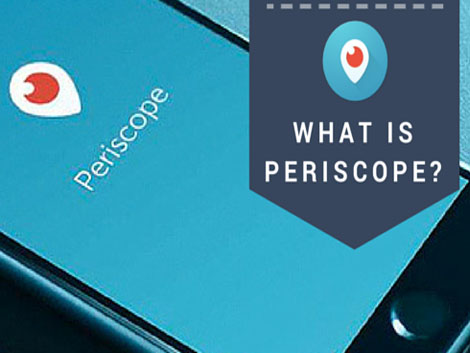 Periscope is already proving to be an incredibly powerful social tool, and savvy marketers are using it in innovative ways to grow their businesses.

Periscope has only been live for a couple of weeks, but it is already being hailed as the greatest social media platform since Twitter. Harry Wallop tested out the broadcasting app. He liked it… The Telegraph

A quick search on Twitter reveals that many people are asking, “What the heck is Periscope?”

In The Beginner’s Guide To Periscope: What You Need To Know, Megan Pruitt gives a good break down of the platform for you on a very basic 101 level. According to here, “I often see a trend of resistance when a new platform becomes popular. I urge you to give Periscope a try; I think it’s amazing.”

I want you to think of Periscope as your own live TV station. In more technical terms, Periscope is a live video streaming platform, and I think it is the missing link of social media that many marketers have been waiting for.

What does Periscope do?

Periscope (owned by Twitter) is a platform that allows you to video-record and broadcast to anywhere in the entire world. If you have ever been on Skype, it is a similar experience but, instead of video conferencing with one person, you can stream to the masses.

Who is on Periscope?

One million users joined Periscope in its first ten days. From my observations, Periscope is a completely mixed bag of ages, genders and personalities. In my professional marketing opinion, I feel that this is a platform that will transcend a wide variety of audiences. I can’t wait till Periscope reveals more usage statistics! Read more…

Periscope Now Has 10 Million Accounts – Time for Your Brand to Start Live-Streaming?

Here is what Social Media Today has to say, “Today, Twitter-owned Periscope – one of the two big players in the live-streaming landscape – has released figures which demonstrate specifically how it’s placed. And the numbers are impressive.

First off, there are now more than 10 million Periscope accounts. That’s an impressive rate of growth for its four months of existence – by comparison, it took Twitter two years to reach its first million users, though probably a better measure, considering the relative maturity of the social media marketplace, would be Snapchat, which took around 16 months to hit 10 million monthly active users (MAUs). ”

How Can Marketers Benefit From Periscope?

6 Ways To Use Periscope for Your Business! (from the folks over at Social Media Examiner)

Imagine if you could build an absolutely massive video following in just 30 seconds?

Despite its power Periscope does have its flaws.

1. Broadcasts are deleted after 24 hours. Which means that any awesome broadcast that you create, yup, that great content is gone forever in 24 hours. Yikes!

2. Only people with Periscope can only view your broadcasts on Periscope. Granted, Periscope has a user base of 10 million people, but if your audience is not on Periscope, they’ll never see your content.

The WP Scope plugin aims to solve both of these problems and enhance the functionality of the Periscope app.

This solves both problems. Your broadcast, in essence, remains alive after 24 hours since it’s on your YouTube channel, and it also syndicates your broadcast through other channels helping you get the most you can out of the broadcast.

Another strategy promoted by WP Scope creators is using their plugin to download other peoples broadcasts and add them to your blog, Facebook, YouTube channel etc. They cite this as a way to get instant relevant content. This method does not violate any TOS (I checked). I’m just not so sure that its the best thing to do.

Now you can place fresh viral and completely unique content in your hands and automatically on your blog. You can cash in on Periscope without ever having to create a video yourself.